I was part of history the other day.  Not everyone can say that, but it’s getting a lot easier to achieve than you would think.  First, a photo, destined to become the iconic image of this event:

Backlit by the riot fires, the snog seen around the world.

No, I wasn’t in Vancouver, turning over cars and setting things on fire.  I watched Game 7 in relative safety from the luxurious theatre in my small town. 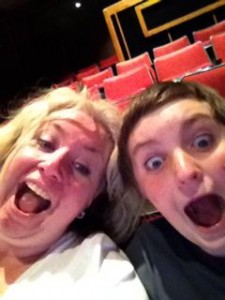 Canucks Game 7 in the Cowichan Theatre

When I woke up the next morning, a lot more had happened than a hockey game.  There were riots in the streets of Vancouver, and all the bad behaviour that goes along with that.  There was news coverage, commentary and public outrage–all the things one would expect to see when idiocy reigns for a few hours.  But there was one big difference, this time.  I don’t know if it’s particularly a west coast thing, a Canadian thing, or if it was just that people have had enough of Beevis and Butthead VS Jackass running unchecked in the streets and on the Internet.  That Thursday in June, the face of Vancouver was marred, but the face of social networking had changed for ever.  Or, perhaps I should say: For Good.

This was not the first time Vancouver had seen riots.  1994 was our first experience with car fires, breaking windows and riots squads firing tear gas into the crowds. That time, a number of people were brought to justice when mainstream media posted a few carefully selected clips from downtown closed circuit cameras.  People caught in the act of looting and pillaging were outed by the police and network tv working in concert. A number of arrests were made, the streets cleaned up, and eventually we all sort of got over it.  There was a lot of theorizing that the ’94 riots had little to do with hockey, and a lot more to do with thugs and hooligans using the game as an excuse to be anonymous amongst the crowds and just create anarchy for the hell of it.

When I went to my computer on that Thursday morning, one of the first things I saw in my facebook newsfeed was a call to ‘Like’ the Vancouver Riot page.  But rather than ‘Liking’ something because it was positive or needed support, instead members of the facebook community were being called upon to Like a round of Public shamings.  Pictures, comments and replies were growing rapidly–this was a group devoted to showing citizens in their worst light.  We were urged to post and identify people responsible for any of the mayhem from the night before on Vanouver’s streets.  This was surprisingly easy, since a great many of the rioters cheerfully outed themselves, taking cell-phone pictures and videos of themselves doing their worst, and proudly celebrating the recording of the, possibly, most idiotic moment of their life. Unexpectedly, someone from my own town became the face of Rioting Morons. Destined to become an Urban Dictionary Word of the Day, Brock Anton was suddenly the face that spawned a wave of Social Media Vigilantism. Thousands of references to him within days: 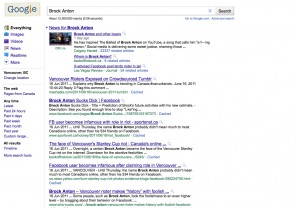 The first few pages of a simple Google search are filled with references to Brock Anton, Poster Child for the Vancouver 2011 riots.

And he even inspired this studio-quality YouTube song and video: The Ballad of Brock Anton

As expected, there is backlash. This blog post appeared the next day, Friday: Vancouver’s Human Flesh Search Engine. It’s a well-rendered piece, and being a personal blog, it is an opinion (just like the post you are reading).  I don’t agree with most of what the author, ‘Christopher’, had to say, but I sure liked the way he said it. It really made me think about what he refers to as the “mob mentality” of people outing the rioters. Hmmmm…. suddenly, someone is calling into question the ethics of people reporting immoral behaviour.

In the end, I have to go with the Shine a Light into Darkness theory of human evolution.  I have to believe that good will rout bad, eventually.  And so does that suggest I am the judge of what’s good and what’s bad?  I guess that is the part we are uncomfortable with.  I got scolded recently for the way I “outed” some bullying behaviour at school. I find it kind of ironic that we tell our kids to speak up, to take a stand, we have candle-light vigils and Wear Pink days, and yet there is a line of….judgmentalness? that we are nervous about crossing. Empower the bullied, but don’t shame the bully.  I don’t know…..

One of the positives that I see from these past few days of Facebook and Twitter Vigilantism is the humanizing of the face of the rioters.  We can’t make assumptions now, like we did in 1994. We see their faces, we see them wearing Canuck jerseys, recognize their youthful exuberance, see that they aren’t all skin-heads, or strangers, or street people.  We learned of one mom who recognized her son and marched him down to the local detachment to confess .  Another boy whose own dreams of glory might be dashed. 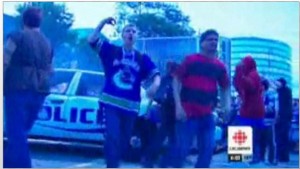 Boy is yelling "Yeah, it's going to burn!" Dad maintains there is no proof his son set the police car on fire.

No one can make assumptions about who the rioters probably were, because we know who they are.

And isn’t it ironic how we used to fear the Internet as a place for child predators and stalkers to hide, enjoying the power of anonymity, and now we fear the power of social networking to out criminal behaviours and misanthropy.

No matter where one’s opinion falls on the issue, no one can dispute the power of the Internet to make something like the next day Clean-up happen, or even this:

Various Thank you Messages to the VDP. Well deserved, and well executed. 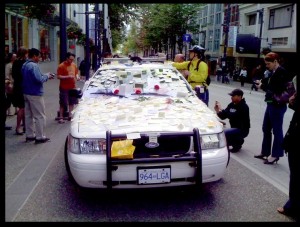 Fool me once, Shame on You »
« Butt Heads and Mall Cops