I get asked a lot about when or if or why to buy new tech gear.  It’s a hard question to answer, because there is no “one size fits all” solution.  I have a buddy who buys damaged vehicles, fixes them up, sells them, and as part of this paying hobby, has a new vehicle to drive himself every few years. Now, I, myself, need a reliable vehicle, I like to drive, and I have moderate pride in what my ride looks like. However, I tend to drive them at least 10 years, until they have long since out-lived their depreciated-value, and if I’ve been lucky, end up having gotten good value for my money of the years.

Technology is not quite the same. Maintenance, for example, had better be free.  The second you have to take a non-warranty computer into the shop, you’d best think twice. Bench rates are not cheap. And, while the hardware might live 10 years, that is ANCIENT in technology-years, and any software or peripherals that might once have run with that system are no longer supported or available.

You need to figure out what your learning curve is– if you stay out, waiting for the price to drop, waiting for the bugs to get worked out, waiting to see if there is going to be a VHS vs Beta- type war–but aren’t acquiring skills, by the time you enter the market, you won’t have gained comfort with the model before it’s replaced, and then you are playing catch-up. If you buy too soon, though, you do risk being the beta-tester that figures out all the bugs for the gen-2 buyers, who also get a lower price and better features.

But then there is the cool factor… some of us nerds just can’t help whipping out our iPhone5 and making all the other nerds jealous (ps– I do not have an iPhone5).  At some point, you balance the Want and the Value. (Unless you live in Money is No Object Land).  Generally, I have managed it this way:  I never, ever buy the first generation-anything.  Even if I have to grit my teeth.  I think sometimes you get lucky, and sometimes you get the bug-riddled, frustration-invoking, cost more to blow it up than it’s worth POS. But the second gen… ah… there is the potential sweet spot.  You get benefit of the early adopters working out the kinks, you get a few new features (usually smaller, faster, and cheaper), and you are not so far behind in the learning.

Adopting vs Adapting. It’s the difference between being a Pioneer or one of the people who moves in next door.  You get some of the thrill of being there near the beginning, and though you didn’t get to fight off any wolves, you do get to hear the stories, and the there will still be people moving to town who want to hear your stories too.

In this vein, I waited to buy the iPad2.  I could have waited for the 3, but I had a year with my lovely, sleeker than the 1, cheaper than the 3, got-to-learn-about-apps and eBooks little bit of Bright Shiny. However, when I needed a new device for the Girl Child, I decided to do the right thing– gave that old piece of crap to her and got myself an iPad Mini. It’s not EXACTLY an early adopt, since it’s a very close cousin to both the iPad and the iPhone… and it’s only a small adapt, since the only real difference is size.  And yeah, I made some nerds drool.

And speaking of Adapters….I do wish Apple would quit changing the adapter sizes, styles, shapes and names. I have more dongles than any woman ought to…. 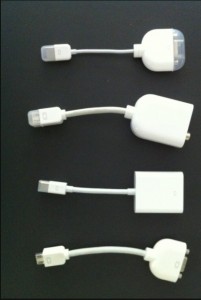