On skipping stones and learning by teaching

Admittedly, I have those kinds of days where I am exasperated and fed up with being given yet another life *lesson*, but more often, I have days filled with gratitude for what I learned that day.  Today was one of those ….

The past two weeks are described (by me) as my Wor-cation.  I teach a course in Learning Theory at a nearby university, to learners embarking on an MA in Learning and Technology. I feel I can bring a unique experience to the classroom, given my 20+ years’ experience teaching k-12, including close to 10 years teaching post-secondary and adult learners.

The 2 weeks was not without some un-requested lessons. One of the things I still struggle with is negative feedback.  I appreciate it, and I consider it a gift from a current learner to a future one, helping me improve my craft, but being human, I don’t like the idea that I have….you know….flaws……

One comment I received this time was that my instruction seemed a little vague at the start.  In fact, perhaps it appeared as if maybe  I didn’t know my content as well as I ought. And then, this same feedback continued, all that I did started to make more and more sense, and by the end of the 2 weeks, they were converted to my methods. It troubles me, though, because I know that one of the reasons I seem vague is that, based on last year’s feedback, I am making a concerted to not “Stand and Deliver”, but rather more fully adopt the Constructivist Theory I am espousing. So….did I go too far?  Do I trust that just as in all truly constructivist environments, the cognitive dissonance experienced by the learner will spur the learner on to deeper and more meaningful understanding? Or do I take stock and recalibrate again? All of the above, I fancy.

One of the things I talk about in class is learning through teaching.  I learn something every day that I teach. I was reflecting on some of my lessons this afternoon as I sat by the water’s edge.  I was thinking about a fun afternoon spent swimming with a friend and her young son.  My own son came along, but being 15 and dragged unwillingly away from his computer, he wasn’t very engaged in the visit.  He began skipping stones along the surface of the water, a skill I know he didn’t inherit from me, as I have never mastered that particular art.  The other boy watched, counted the skips excitedly, but wasn’t inclined to try it himself, until my son left to back home (being given dispensation by me for having served his time and was permitted back into his dungeon).  A short time later, my friend’s son scoured the beach for some flat rocks, and made his first attempt. It was a reasonable effort, but flawed in its delivery, rather more like how one tosses a Frisbee than skims a stone.  “Here Jack”, I said (ever the one to pounce on a teachable moment), “let me see. This is a better rock– see how thin it is?  Now, hold it like this, bend at the waist, and you want to throw it underhand, and try to get the rock at an angle that’s almost level with the water.”  And didn’t his very first re-calibrated effort result in a stone skipping beautifully twice before sinking.  “Cool!” said my little friend, and within minutes he had beat his record at least twice, perfecting a 5 or 6 skip throw.

I don’t give much credence to that old chestnut about “those who can, do; those who can’t teach”, but given my relationship with negative feedback, or even constructive criticism, it’s bothers me that people who think like that don’t get to see moments like Jack’s. It didn’t occur to me to say “Well, I can’t skim stones either” and not help him, but rather to offer: “I can help you find the answer.”

Imagine my surprise today when I was mulling all of this over in my head and found myself contemplating the smooth, flat rock in my hand. Yes, I know this seems like the punchline of a smarmy Hallmark Card commercial, but I thought to myself that I should at least try…. and yes, 3 skips out of that one stone.  Three. A personal best.

A personal best in Learning by Teaching, too. 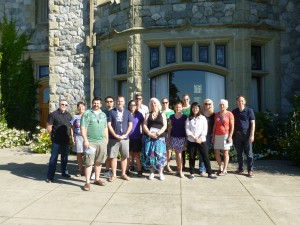 Dedicated to all my MALAT learners….and all the Jacks out there

Vaseline on the lens »
« Bosses, business and serving the public.