I have a pretty good vocabulary.  Better than most, if I’m honest, and with a particular penchant for archaic and unusual words.  And I literally love alliteration, but that’s another topic.

So I thought about my friend’s statement, and what I heard was “Complacent” as a synonym to “Lazy”, “Taking-for-Granted-y”, “unengaged”.

I was reflecting on this conversational snippet the other day, thinking about how relationships morph, change, stop and start, evolve….or don’t… and I was reminded of his words.

In the vein of taking things for granted, I got to pondering the concept of privilege, and thinking about how these two concepts related. I began, as one does, with a Google search: 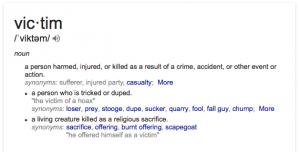 But if you feel like a victim, is it because of your choices, or because you had no choices? I looked up the famous article by Peggy MacIntosh “White Privilege: Unpacking the Invisible Backpack” to remind myself of what it really means to be privileged. It sounds great, doesn’t it? Until you see how privilege is also pernicious. (I mentioned that I adore alliteration, right?).

The article is challenging to read, no matter which subset of society you belong to.  But it also explains a lot, and it reminds me not to be complacent, in any sense of the word.