I was out for a walk the other morning, a route I’ve covered dozens of times.  It was a beautiful and unseasonably warm day, and each jogger/walker/stroller/dog herder I passed smiled and bade me good morning.  An utterly bucolic stroll.  And then I heard the shouting.

It is not unusual, on this particular route, to meet, pass, or be passed by, a dozen people or more people, but as “luck” would have it, on this particular morning, I appeared to be the only one going in the direction I was, and I had already met all the people coming from the opposite direction.  It was at the precise moment I realized I was alone on this section of the trail that I heard the shouting.

This is not a secluded area.  Houses border the green space, and the section I was one runs along the back of two schools and the school board office and bus yard. As well, a new development is under construction, and on any given day there can be dozens of workers working. But not today. On this day, the schools were empty (spring break), the board office and maintenance yard desolate (spring break, again) and the construction site strangely deserted (coffee break?).  By the time I had taken all of this in, and slowed my pace, the source of the shouting came into view as I rounded a corner.

A hard-to-judge-his-aged man, highly agitated, and unfurling an impressive string of expletives, who would, at first subjective glance, appear to be homeless, or some kind of vagabond at least.  My community has a large number of homeless, and this particular area is frequently reminiscent of an unruly campground, with erstwhile shelters and tent-esque installations dotting the perimeter of the trail.  It’s not at all uncommon to encounter an inhabitant emerging from his or her temporary shelter, and when I do, I tend to offer a greeting or a smile as I would any other individual on the trail and think nothing else about it.  Whether on my own or walking with a friend, I am always watchful but never fearful. Until this day. I paused where I was and considered my options. I could see the man still shouting, and starting to pace back and forth on the trail, waving his arms and twisting his hat in his hands, then throwing it to the ground. There was no exit from the path between me and the agitated fellow. The nearby houses were not nearby enough. As the shouting and arm waving intensified, I stopped and considered turning back the way I had come. Frozen for a moment, my internal battle was not so much about fear as it was about resenting the fear I was feeling. My inner demons were much quieter and orderly than those of the the fellow before me, but still held me motionless, indecisive.  This frozen moment was interrupted by 2 construction workers appearing on the trail suddenly.  Their appearance also caught the attention of the agitated fellow who suddenly stopped yelling and sat down on a concrete abutment, with his back to the trail.

Charting a course with as wide a berth as possible around the seated man,  I made eye contact with the workers, and confidently carried on.  Just as I came level with the angry man, though, he turned his head slightly towards me, and surprised me by saying “Good morning.” I stammered “G…good morning” in return, nodded to the workers and continued my walk. There is a lot in those few moments– assumptions, personal safety, community issues and taking all of those things for granted.

Recently I posted about finding beauty  in unexpected places, and this encounter gave me the same feeling. I can choose to see the ugly, be sad for what was lost, or I can embrace beauty and relish what I find and have.

I don’t have a photo of the trail incident, but offer this one instead– what was simply some old concrete and partially rotted metal footings took on the look, to me, of an art installation.  Find the beauty. Feel gratitude. 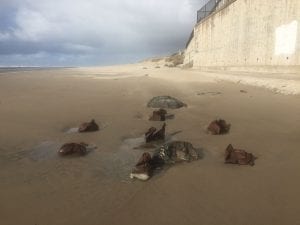 Girls and their Girls »
« Perception