Funny thing– I had to completely rework this post, which had been sitting in Draft form for almost a year. Originally, my thoughts were wandering down the path of what happens when the shiny starts to rub off the lastest New Thing.  Apparently, even a year ago, I had that feeling about Wordle. Now, don’t get me wrong, I still love Wordle, and always will think it’s amazing, it’s just that I was starting to see Wordles everywhere, and like anything that gets overused, it’s full value is no longer appreciated.  So, I had a little mini-rant started up about how Wordle and other Word Cloud/ Tagging Cloud generators were being overused, and how much I resented having my thunder stolen, and a variety of other grumblings and rumblings.

Ironically, I never got that draft completed, and so the post sat in my Draft folder for almost a full calendar year. Until tonight. I was sitting waiting for an order of sushi and the restaurant TV was tuned to CTV and their Year in Review was going on.  The host was interviewing some “expert” analyst (who looked about 17 years old) and the analyst was presenting (/sarcasm caps on) This New Technology Where He Copied and Pasted A Bunch of Items about each of the Political Parties and Generated Word Clouds. (//sarcasm off). After a painful explanation about what Word or Tagging clouds were, the viewer was treated to one Wordle-type graphic for each of the 3 parties, and then listened as the 2 pundits “explained” what they meant.  Shockingly, the NDP cloud prominently mentioned Jack Layton, the Conservative cloud highlighted both Stephen Harper and taxes and the Liberal cloud said….not much.  It was a less than spell-binding article, but worse than that, I thought to myself “Are you freaking KIDDING me?  THAT’S all it takes to get on TV?”

The experience did highlight for me, however, that I need to be more patient, allow people to adopt technology at their own pace, be thankful that more of this stuff that I have been living for years, is actually making it into the mainstream…. But still…… A Political Wordle?  What the hell….

Here’s a Wordle of my Blog’s URL, though…..just in case I get invited to speak on Camera some day about it. 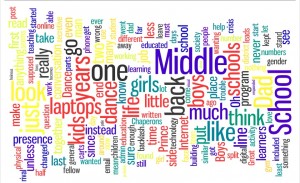 It is all about IT Wordle

Category Meanwhile, in other news, More of Lisa's thoughts | Tags: