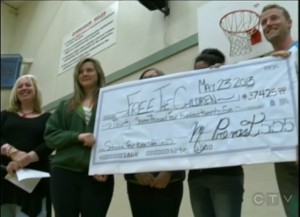 That’s me, on the far left, and the Giant Cheque being handed over to Taylor Conroy. In order to understand why this massive cheque is massively important, I need to tell you who all of the people (or tops of heads) are and how we all are connected.  It’s a story that took just shy of 2 years to tell. I’d like to not only tell my story, but share complete details so that anyone else who wanted to write a massive cheque to help children get educations could do the same. The story starts, as stories often do, with a single word: Inspiration.

I attended a humble TEDx event in the spring of 2011, just because I’m a little nerdy, and it seemed like a fun way to spend a Sunday. I didn’t actually expect it to create great change in my life, I thought I was just having a nerdy Sunday. One of the speakers was the likeable young Taylor Conroy who inspired me to take on the challenge of building a school in Africa. I took the idea to my staff and we decided that if 1 school was good, 5 would be better (explanation Here). And so we officially began raising money for our project, named the 5*5*5*.  (click the picture above to see the wrap up event)

Along the way, inspiration took many forms. The three students who stand between the adults represent different moments in the project–one girl just took on the idea with such gusto she canvassed her neighbourhood, talked to her coaches and shopkeepers and anyone who would listen about our goal to raise $50 000. Strangers wandered in to the school to drop of donations because Kayley inspired them.  Another girl in the photo is Bailey, who, along with her brother, made a sweet little video called “It’s time for change” that featured some of our students talking about why they wanted to help less fortunate kids. And then there is Aneesha.  Who quietly and humbly came to me one morning and asked if it was possible, could we please consider making the school in India an all girls school. She went on to share with me things she knew about how girls her age were treated in India, and how infant girls were disposable in some regions, and other things that a teenage girl living in Canada should know nothing about. My coworkers and community inspired me too, along the way, and there was never a shortage of ideas, just sometimes a shortage of time to implement them. We also had events conspiring against us, which is why we weren’t able to meet our original goal, but in the end I think we learned even more about setting goals and persevering and celebrating success than we might have otherwise.

Little boosts like this along the way helped too:

Below I have compiled a list of ideas we had to raise $50 000.  Some we didn’t actually execute, but all are viable, and appropriate for almost any grade level.  Some require an initial cash outlay, some can be done for free.  I’m sharing these ideas with a goal to inspiring others to do what we did, and also as a reminder to myself of what is possible….

One of the difficulties I had was getting the community involved.  I didn’t want to rely just on the school community to raise all the money, I wanted to let the whole town in on it too.  I discovered that was a little tougher than I realized, and strangely, people didn’t start calling me up, asking to donate money. Establishing a fund-raising committee, then, requires that members have different skill sets. For my part, I was mostly running the show, and missed some opportunities just because I only had so much time to make them so. If you’ve come to this page looking for fundraising tips, please don’t hesitate to contact me (through the comments, or via email). Here, then,  is my Inspirational Ideas for Increasing Input to your school charity.

Obvious/require no or minimal cash outlay:

In school/required some up-front money:

Events  (these were all in-school, but open to the community):

I’m sure there is more– I will update this page as I remember more details.  Please feel free to use any or all of these ideas, and send me more of your own, too.  It is time for change….