This tale is another one of convergence.  Visit my companion blog, The Uncoordinated Coordinator for more tales on this adventure. Today’s debrief, however, is a deeper dive into online privacy.

Over the years, my comfort level has shifted from one of almost abject panic when someone on an open discussion board was able to access my IP address and randomly started talking about coming to the town I lived in; to excitedly arranging lunch dates with people I had previously only known online.  In the beginning (she said biblically) I never posted a photo openly and my “handles” or nicknames were always pretty anonymous.  Eventually, over time, that idea of maintaining privacy became obviously futile— the choice appeared to me to be either dive in with both feet, or completely disengage in the Web 2.0 (the difference between 1.0 and 2.0 being interactivity— no judgement, just the acknowledgement that you are in consumer only mode, you don’t add to the body of knowledge, the community or the connectedness of the Internet.)

And so over this trans-formative time (which I am sure is still shifting and morphing) I have moved from consumer, to tentative inter-actor, to full-on community builder and contributor.

It was fascinating to me, during this last conference I attended, to get to spend time with one of my Internet Heroes.  For the 6 of you who don’t know who I mean, I speak of Dr. Alec Couros, from U of Regina, a valiant defender of an open web, preeminent role model of how to lead a professional and personal life online, and a frequent victim of catfishing-style identity theft.  The Catfish don’t steal his identity, you see, just his image. As his battle (a futile one) against catfishers moved from occasional to frequent, I grew more and more puzzled about “why him?”.  The irony is rich— he lectures on topics of establishing an online presence, joining online learning communities, is considered a world expert on many related topics to a life lived online.  He is also very generous in sharing his personal life— generous and fearless— many of us who follow him on Twitter or Facebook have watched his beautiful little family grow, and seen frequent pictures and videos of his children.  So when he started to be the unwilling face of catfishers, I really started to rethink my own approach to privacy.  We talked about it a little over the few days, and one of the things he reflected on was that it was easy for scammers to find copious photos of him, from a variety of sources.  In trying to create a fake life, the more photos the better—and ones that can be photoshopped provide even more fodder— like the one where one of his children made way for a VERY obviously pasted in place dog, or numerous “passport” photos that “proved” his citizenship.  Anyone (like me) who has ever had their passport application returned no less than 3 times (still me) knows that random backgrounds, poor lighting, and placement on the document are critically important (like probably the American Eagle does not perch on one’s head). For more on Dr Couros’ story, here’s a more in depth look from one of his colleagues: http://katiahildebrandt.ca/the-curious-case-of-srkj-rife-victim-turned-harasser/

The upshot of all these unscrupulous scammers using his identity has been that many gullible women (at this point, no victimized men have come forward, to my knowledge) have been (bad) bilked out of thousands of dollars, and (really bad) realized that the person they fell in love with really doesn’t exist.

Because the saddest part of all of this to me is that it IS possible to form real and lasting bonds with someone you “only” know online….. when (and this is the critical part) BOTH parties are fully engaged in the process— honestly and openly communicating and sharing.  I can’t speak, personally, to falling in love and choosing a life mate, but I can certainly attest to friendships, professional collaborations, companionship. The people who are victimized in this fashion have lost sight of that— and there exist very simple “acid tests” —a Google image search, to start, a basic eye for edited and altered photos, a deep understanding of “It seems too good to be true”, and a personal relationship with one’s intuition.

I’m reminded of one time, in the very first online community I joined, a new member joined the scene.  I was sucked right in to believing his patter— thoroughly entertaining, obviously highly intelligent, connected with some of us via email, as well as in the community chat. Over a period of months he maintained the character (one I am now convinced was completely false) and his online persona, eventually, attracted the attention of a single mother, vulnerable, obviously slightly left of centre, struggling with chemical imbalance, but in the main, “normal”, well educated, smart enough to know better.  For my part, I was happy for them, for I believed his persona to be valid, after so many months of consistency, and her I had “known” even longer, and they did seem like a reasonable couple to have a shot at a good relationship.  The only problem was they were separated by the Atlantic ocean.  Over time, as we all watched their online courtship, things progressed, and she allegedly traveled to where he was.  I say allegedly, because I stopped believing in both of them when, one day, after a period of several weeks of silence, he reappeared in the community, and messaged me privately to tell me that he had lost his teenage son in a tragic bus crash.  I became suspicious when I realized I was not the only one he “honoured” with sharing his grieving— the story was he didn’t want — couldn’t cope with— the outpouring of sympathy from the community at large, he just wanted some normal back.  So, naturally, we respected that. But me…. I became more and more suspicious.  His story was consistent, though lacking details, and let’s be honest, what kind of a horrible person would make up a story like that? Keep in mind that, at the time of writing, these events took place about 15 years ago.  A lot of information could be found, but not always easily.  However, a tragedy of this magnitude would have to have shown up somewhere.  This was post-Columbine, pre-facebook, so the conduits of bad news were not a firmly entrenched.  But I scoured news sources in his country, for days, and obituaries, and police bulletins, and anything else I could think of.  Nothing. And so I started to doubt more formally.  And one day, I very, very tentatively contacted his now-fiancee and spoke of my concerns.

She did not thank me.

It wasn’t too long after that the appeal of that community lost its shine.  I went on to do an online Masters degree, (at a prestigious university) however, and went specifically into the program because of what I knew about the potential power of online connections.  Unfortunately, sometimes that power is used with malicious intent.

I never did hear the end of that story.  A friend from that time, one who had actually traveled much of the globe and met a number of the community— including a stop in my town— told me that she had heard that relationship ended badly, that he had come to live with her, but left soon after, having delivered her a physical beating, and, I’m sure, emotional abuse as well.

It comes to me that there are victims, willing victims, and unsuspecting accomplices to both.

Here is my tribute to you, Alec– my real and my virtual friend.  You will get why this is funny.  (PS– I hope you know I actually have real PS skills) 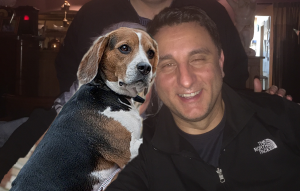 Self deprecate much? »
« I don’t care about FaceBook using my data, but it could at least buy me a drink first