I told my learners (my kids, my chicks, my little gang…..teacher culture is so deeply engrained) that they mustn’t think they won’t be changed by this experience-embarking on their Masters degree. They must embrace the fact that at the end of 2 years, they will have changed, they will be different, because of having chosen this path. In fact, my co-facilitator told them the same, even based on these 2 weeks. In the whirlwind of goodbyes and tidying up and debriefing, I didn’t start to reflect on my own feelings until I got back to my hotel room. I realized that to a lessor degree I had been changed, too, by this experience. Affirmation, respect, encouragement, appreciation…..all this positive energy flowing towards me. All because I had stood up in the front of a room full of people and did something I loved to do–share knowledge.

Throughout these two weeks, I had struggled to hit my stride, to find that balance between competent and authentic. Every lecture I delivered brought me a little closer, each experience encouraging me to shed off what I thought I should be, and moving towards what I knew I had to be.
My final activity is a case in point.

On the last day, kind of shoe-horned into the schedule, I was to run the warm up activity. Each day a different team had run the morning warm up, activities running the gamut of writing limericks, rewriting nursery songs, or determining the difference in 2 truths and a lie. My original plan was to do a balloon tower challenge, but as the days progressed, that seemed like it was going to be a little light. Inspiration and a nearby dollar store converged, and an activity was created that I shall henceforth call “Take $20 worth of Dollar store crap and tell a story with it”.

I divided the room in two, males against females, and watched a fascinating sociological experiment unfold. More on that in part 2, but the take away for me was watching 38 grown adults play for twenty minutes, joyfully and with abandon. Did they all buy-in to a pretty fluffy activity? Probably not. But they all participated in some way, and I knew they did so because I provided the opportunity–either for me or in spite of me, but only because of me.

There was some deeper learning, though….

Throughout the two weeks, the community building activities had centered mainly around whole class or small group activities. The night before my final activity, I struggled with how to organize the groups in a new way. The sudden inspiration to divide the group by gender seemed like a fun twist.

The activity was simple enough to introduce, and soon both groups were diving into the giant bags of crap. They were tasked with somehow retelling the story of our two weeks together in a very intense course of study. They had only 20 minutes to craft their tales. Within seconds several things became obvious… 1 was that we need to play, no matter how old we are, and 2….there are still differences between boys and girls, no matter how old we get. The women were quickly dividing tasks and planning and communicating. The men were sitting around making noises with the balloons and daring one fellow to build and explain a convoluted set of models, while they intermittently chanted his name. I was back in grade 5 again…..

In the end, both groups did a terrific job of recapping our 2 weeks together, but I was once again reminded of the difference between boys and girls. 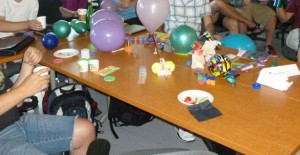 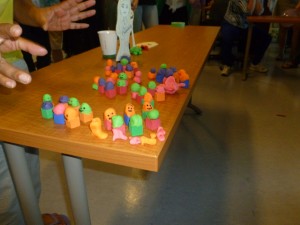